“Against Normalization”: Seminar held by Awdeh Team in Kuwait 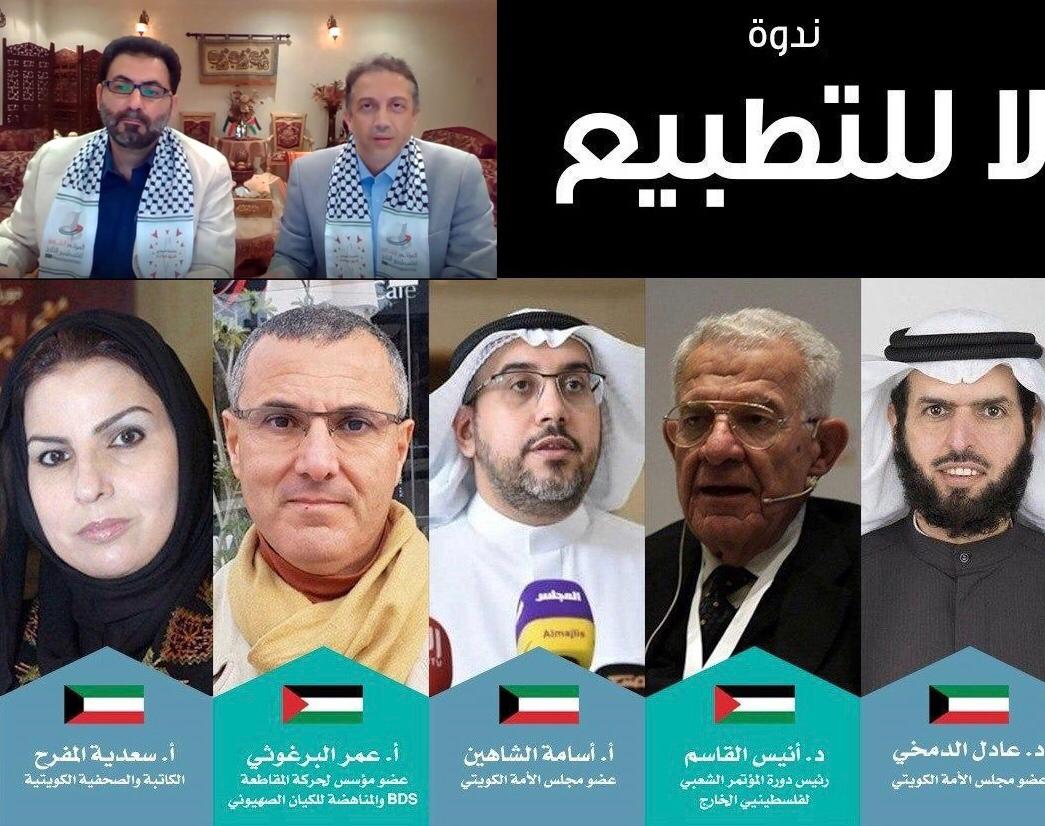 Kuwait — On Thursday, 8 August 2020, the Awdeh / Return Team held a seminar under the auspice of the Popular Conference for Palestinians Abroad (PCPA), which was titled “Against Normalization”.

The seminar was attended by a number of Palestinian and Kuwaiti figures, who explored the stance of the Arab peoples, which stand in opposition to normalization with the Israeli Occupation, particularly Kuwait.

Adel al-Admkhi, member of the Kuwaiti National Assembly, discussed the assembly’s firm support of the Palestinian cause. He said:

“For those who are saying that Kuwait will be the last to normalize with the enemy, we will not normalize with the aggressor occupying enemy, until this land is liberated. Even if the whole world is heading there, we are heading towards Palestine ".

Regarding normalization, he added:

“What is being raised about normalization and that it is peace and reconciliation with the Jews is permissible, this talk is undoubtedly an act of deception and in some way is a circumvention of the rulings of Sharia.”

He explained that normalization with the occupation grants it recognition, describing it as "a betrayal of the law and the nation."

Concerning Kuwait's stance towards the Palestinian issue, the representative said that the Kuwaiti parliament sought to expel the Zionist parliament from the international parliament, and had many positions registered in opposition to dealing with the occupation.

For his part, Dr. Anis Qassem, an expert in international law and the head of PCPA’s first session, said:

“Normalization means being normal. Even between countries, it indicates that a state should deal with its neighbours on an equal footing in commercial, scientific and industrial exchanges in accordance with international law, which Israel rejects to do.”

Qassem pointed that the processes of normalization between "Israel" and the surrounding countries are "artificial and unnatural."

He stressed that "Israel" cannot normalize relations with any country, because by normalization it would negate its essence as a Zionist movement, saying that it is "an aggressive, settler and destructive state by nature."

"Any normalization is inconsistent with human thought, human movements and human rights."

"To have a Jewish state on the moon would be an illegitimate act, and it cannot be a normal state even if founded on the moon."

Osama al-Shaheen, member of the Kuwaiti National Assembly, discussed three main points regarding the role played by the Kuwaiti parliament, which are divided into "representing the nation, monitoring the government, and passing legislations for the government.”

"Two days ago, 41 members of the Kuwaiti parliament signed a statement affirming that the position of Kuwait, the Emir, the government and the people, is to the side of the Palestinian cause."

Regarding monitoring the nation, al-Shaheen explained that they "submitted a mandate that was adopted by the National Assembly and was passed as a resolution to the Foreign Affairs Committee, under which the latter is to monitor the roles of the government.16 ministries were monitored in relation to their effort to resist and prevent normalization."

He indicated that the National Assembly presented a new version of the anti-normalization law that includes new manifestations and forms of the Zionist infiltration attempts in Palestine, as part of the parliament's role in passing government legislations.

On his turn, Omar Barghouti, a founding member of the BDS movement, the BDS movement and its role in protecting Palestinian rights and bringing about a change in the balance of power.

"The key challenge now faced by the Arab peoples, with their political and cultural elites, and their broad popular frameworks, lies in how to convert the tremendous popular Arab support for the cause of Palestine and the rights of its people into effective and sustainable advocacy and influence campaigns capable of opposing official and popular normalization, and at the same time capable of achieving victories against companies and institutions implicated in Israel's violations of the rights of the Palestinian people.”

The Kuwaiti writer and journalist Saadia al-Mufarah also contributed into the discussion, saying that the concept of rejection of normalization in all its forms and labels must always be emphasized.

She noted that the Arab peoples “stood as a wall against all attempts at cultural normalization,” adding that: