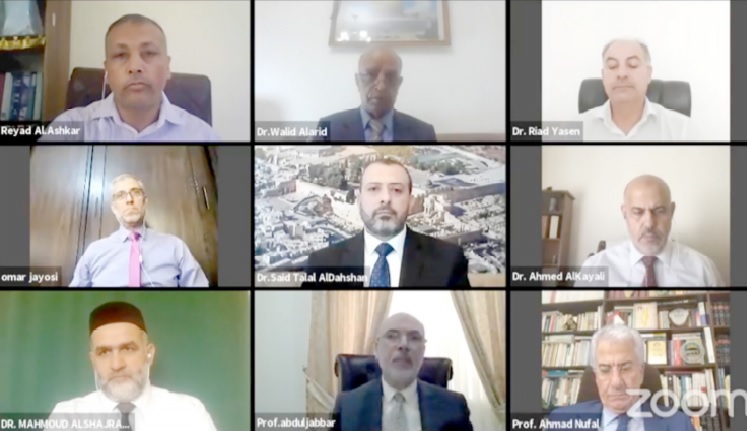 Speakers unanimously agreed that Jerusalem is an issue of sovereignty, religion and a historical civilizational identity, stressing that it is an integral part of the occupied Palestinian territories as stated by the international law.

They called on all the free people of the world to work diligently to liberate it and to reinforce all forms of steadfastness shown by the Palestinians in general and the Jerusalemites in particular, to help them stay firm in the face of the Israeli occupation measures and its attempts to empty the city of its people and preserve its character and Arab identity.

The recommendations and the statements were made during a meeting organized by the Union of Palestinian Academics, entitled "Jerusalem’s Reality: Future Indicators and Elements of Resilience", on the 51st anniversary of the burning of the blessed Al-Aqsa Mosque.

Professor Said Nofel, the head of the Palestinian Academics Union, presented a paper titled “The Political Dimension of Jerusalem’s Issue,” while Professor AbdelJabbar Said, Chairman of the Union’s Advisers Committee, presented a paper under the title “Establishing the Authoritative References of Jerusalem’s Issue and its Role in Supporting the Resilience of Its People.”

As for the professor of Ottoman history, modern and contemporary, Professor Walid al-Areed, he presented a paper entitled “The Zionist Policy in Internationalizing Institutions into Colonies.” Dr. Riad Yassin, for his part, discussed a paper titled "The Cultural Heritage of the City of Jerusalem.”

Dr. Said al-Dahshan’s paper, however, was titled "Jerusalem and International Law," while Dr. Mahmoud al-Shajrawi’s paper was explored under the title "What You Should Know about the Blessed Al-Aqsa Mosque.”

They also stressed the importance of supporting the Arab and Islamic authoritative references of Jerusalem and preserving them, including the Jordanian reference for Islamic and Christian sanctities, noting that it is the only legal umbrella for safeguarding the holy sites in the face of the futility of the occupation and its attempts at Judaization.

The recommendations also indicated the necessity of preserving the historical character of the city and its Arab-Islamic identity and blocking all attempts that would harm its character and authentic civilizational identity.

Al-Kharouf added that among the most prominent recommendations is the call to use soft power in attracting all Arab, Islamic and international powers to adopt the cause of Jerusalem and support the steadfastness of Jerusalemites.

Furthermore, there is a need to call on Arab and Islamic countries to adhere to the special legal status of the city of Jerusalem as a whole (east and west), and observe the United Nations General Assembly’s Resolution No. (303) on passed 12/09/1949, which considered the Israeli presence in West Jerusalem since 1948 as a de facto, not a legitimate, presence, highlighting that the Israeli occupation does not possess the elements of legal sovereignty.

Al-Kharouf also referred to a recommendation that demanded the necessity of implementing an integrated engineering project for the maintenance and rehabilitation of all the buildings of the blessed Al-Aqsa Mosque, and adding everything that would unify its structure, "Al-Aqsa is no less important than the Great Mosque of Mecca and the Prophet's Mosque."

As stated in the recommendations, "there is a necessity for establishing a center for Jerusalem studies, which task will be collecting relevant historical documents, primarily Ottoman documents."

The recommendations also stressed the need to strengthening the elements of steadfastness among Jerusalemites in the face of the occupation measures and its attempts to empty the city of its people, and to provide all forms of financial, legal, psychological and social support for them intensely.