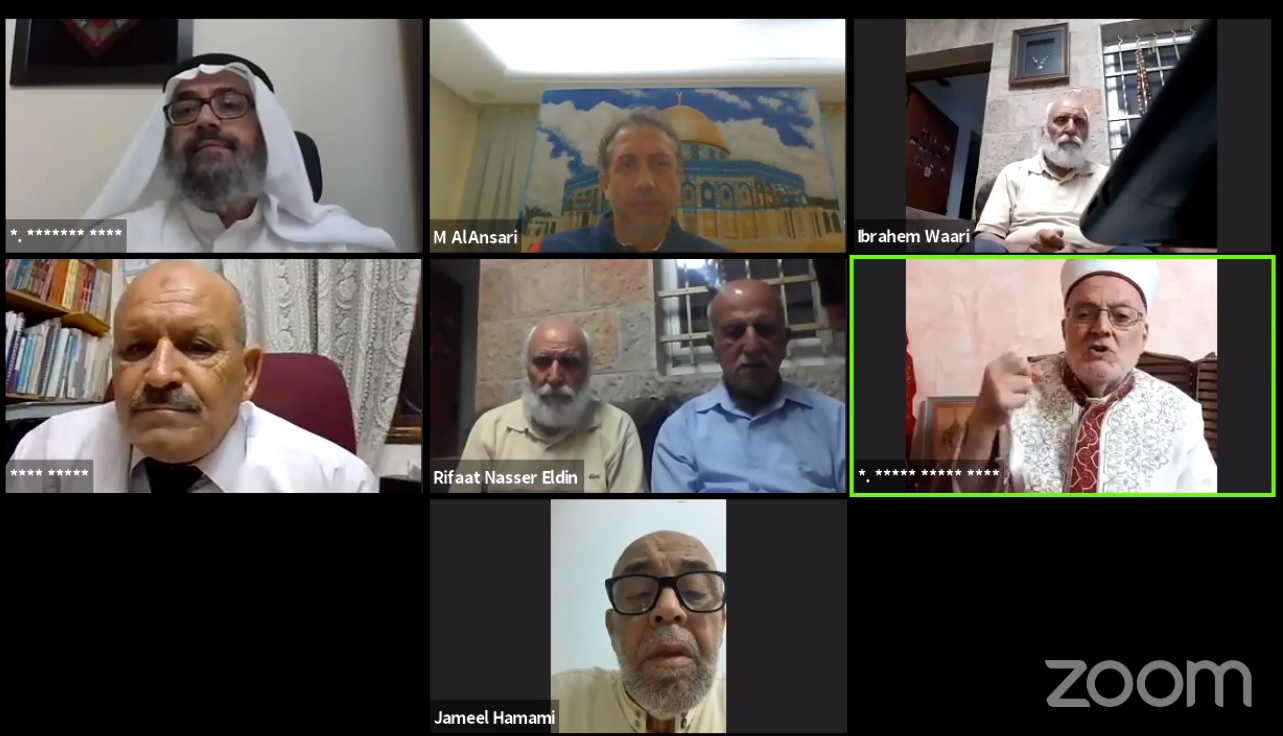 On Sunday, 23 August 2020, the al-Quds Committee of the Popular Conference for Palestinians Abroad (PCPA), along with the Supreme Islamic Committee and the Employees Club in al-Quds (Jerusalem), held a seminar titled: “First-hand Accounts of Burning al-Aqsa Mosque”, hosting a number of personalities that witnessed the incident and helped put the fire down at al-Aqsa Mosque 51 years ago.
The seminar participants confirmed that the fire was not caused by an electrical fire as reported back then, stressing that it was rather started by the Jewish extremist Michael Rohan.
One of the eyewitnesses is doctor and sheikh Ekrimah Sabri, who helped put the fire down at the time, saying that the fire first broke out exactly at 6:45 am, on Thursday, 21 August 1969.
He said:
“The engineering report confirms that the crime was not committed by a single person. It was actually perpetrated by a group, for the fire was in different places and the flammable substances are not available on the market and are only possessed by states and armies. This is thus an indicator that the occupation’s state planned the incident and gave the order to start it.”
He added:
“When the fire started, the Israeli media attributed it to an electrical contact, seeking to obliterate the truth. The fire, however, was feeding on several parts, proving that the perpetrators were many. Later on, one person was charged because the people identified him as Denis Michael Rohan, and arrested him.”
Dr. Sabri identified Rohan the convict as an Australian citizen and a follower of the Grace Communion International, which devotees believe that the claimed temple cannot be found unless al-Aqsa is totally destroyed.
An evidence of the Israeli occupation’s involvement in the fire, Dr. Sabri added, is obstructing the fire engines, sent by the municipalities of Nablus, Ramallah, Hebron and Bethlehem, which reached the scene at 10:00 and managed to put the fires down at 3:00 pm.
He pointed out that immediately after the fire was quenched, the Supreme Islamic Council held a press conference, accusing the occupation of perpetuating the fire. Furthermore, an engineering unit was formed on the same day, which concluded that the fire was caused by flammable substances, having nothing to do with electricity.

Dr. Sabri stressed that the fire mainly targeted the eastern side of the mosque, “because the eastern roof is made of wood and contains lead, like any old building. The western wing, however, was built of concrete that has been previously renovated. For this reason, the eastern wing was fast to catch the fire, due to which the Salah al-Din pulpit was burned, along with the dome covering it.”
Dr. Sabri accentuated that the incident of the al-Aqsa Mosque fire is being revived every year, because fires and accidents are still threatening al-Aqsa, and that “future generations must know the truth.”

Shiekh Jameel Hamami also provided an account of the incident, for he helped put the fire down, as well.
He said:
“When I heard the al-Asqa Mosque’s guards calling, shouting that there was a fire. I immediately headed there, before I entered the mosque I saw a foreigner exiting the Yusufia Cemetery. I never thought that this man was the one who set fire to the mosque.”
Describing the fire, he added:
“We went into the mosque. The guards were shouting that a fire broke out near Salah al-Din Pulpit. On speakers, Jerusalemites were being called to help save the mosque. The fire was rapidly feeding on walls and the wood, for the mosque’s wood is of the easily flammable dry type. People gushed in with water. But the fire was beyond the resources of the Islamic Endowment Directorate and the people praying at the time.”
Hamami pointed out that he was summoned by the al-Maskoubia Police two days later to identify the people who caused the mosque’s fire. He also attended the first and second trail of Michael Rohan, who was accused of the incident. And then, the court found him to be mad and he was sent into a sanitarium.
The narrative saying that the perpetrator was mad cannot be believed, because those who set fire to the mosque have composedly found their way into the mosque and spread the flammable substance. Other accounts report that Rohan visited the mosque two days before the fire, toured around it and identified its parts.
Over the course of the seminar, other personalities provided accounts of the incident and the Jerusalemite researcher Ihab al-Jalad broadcasted live streaming from inside the mosque, showing the areas affected by the fire and the wells, the waters of which people used to combat the fire.