The national role of Palestinians in diaspora, seminar held by PCPA 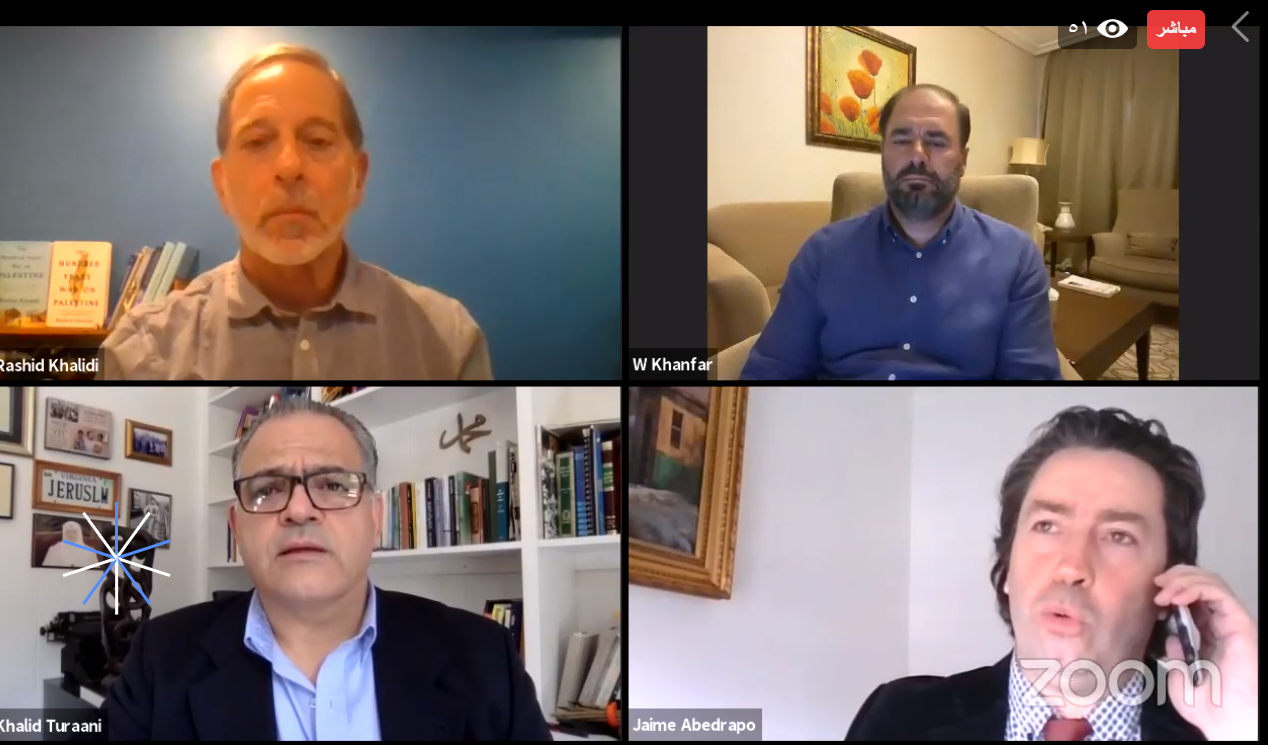 On Saturday, July 25, 2020 — The Popular Conference for Palestinians Abroad (PCPA) held a seminar titled: “Palestinians abroad and national agenda: The role to play and the mechanisms,” the headlines of which were discussed by a group of Palestinian elites in the diaspora.

The participants stressed a common necessity, namely the need to realize a unity of the Palestinian people and to come up with a harmonized narrative to combat the Zionist occupation, in addition to the urge to establish a new strategy in defense of the Palestinian cause, accentuating the importance of bringing Palestinians abroad into the struggle, especially the younger generations.

Wadah Khanfar, head of the al-Sharq Forum, suggested several ideas and points to consider regarding the construction of a new political strategy and the freshening of the Palestinian discourse.

He added that a Palestinian unity is the ground for any liberating project, adding that:

“Recentralizing the unity of the Palestinian people must be a benchmark, while the Oslo happenings must be written off.”

He also called for building independent Palestinian platforms, representative of all the people have to offer, as to garner their ideas related to the past and to the future alike.

“We need a platform that is totally separate from the national Palestinian authority, let it be persons, institutions, visions and privileges, which opens up for Palestinians from around the world to participate. [It should be] an independent platform, elected and representative, by and of the forces of the Palestinian people everywhere.”

He pointed to the problems within the discourse Palestinians are adopting to address the world.

He also highlighted the importance of improving the Palestinian political strategy, saying that:

“We should level up our struggle as to give it a universal humane depth that enables us to be partners in building a true and honest system. Our acts, communication and alliances with the world must not seem exclusively representative of our interests.”

Commenting on the representation of the Palestinian people in the diaspora and their role in the national project, as well as the self-determination right of Palestinians, the Palestinian-American historian and professor of Modern Arab studies at Columbia University, Rashid Khalidi said:

“The instrumental dimension to Palestinians abroad lies in the necessity to bring new ideas and generations into the Palestinian politics.”

Khalidi stressed that all the national liberation movements, which date back to hundreds of years or more, had the diaspora at heart, as it played an important role in proposing a strategy for revitalizing national support and leading national action.

He said that a crucial change is witnessed in the American sphere regarding the Palestinian cause, pointing that there is action supportive of Palestine that parallels the Zionist one at several universities, for there is awareness among the younger people that matches all the Zionist powers.

He pointed out that also in the US media, a change in proposed ideas is taking place, for anti-Zionism thoughts are being suggested and others addressing the two-state solution, which was prohibited in the past years.

Additionally, there is a conflict within the Democratic Party, he said, which is the representative of the US majority speaking of the Palestinian matter, between the pro-Israel leadership and the base heading towards Palestinian rights and criticizing Israeli practices.

Moderating the seminar himself, Khalid Turaani, the Chairman of the Board of Directors of the International Platform for Civil Society Organizations working for Palestine (IPalestine), reported that 60% of the West Bank, area C, is run by the Israeli Occupation in terms of security.

“On the ground, the Palestinian project is decaying and slopping.”

Several other figures took part in the discussion towards the end of the seminar, aired by AlJazeer Mubashar, who also concentrated on the role of Palestinians in diaspora.