From Egypt to the UAE, normalisation with Israel heralds disaster 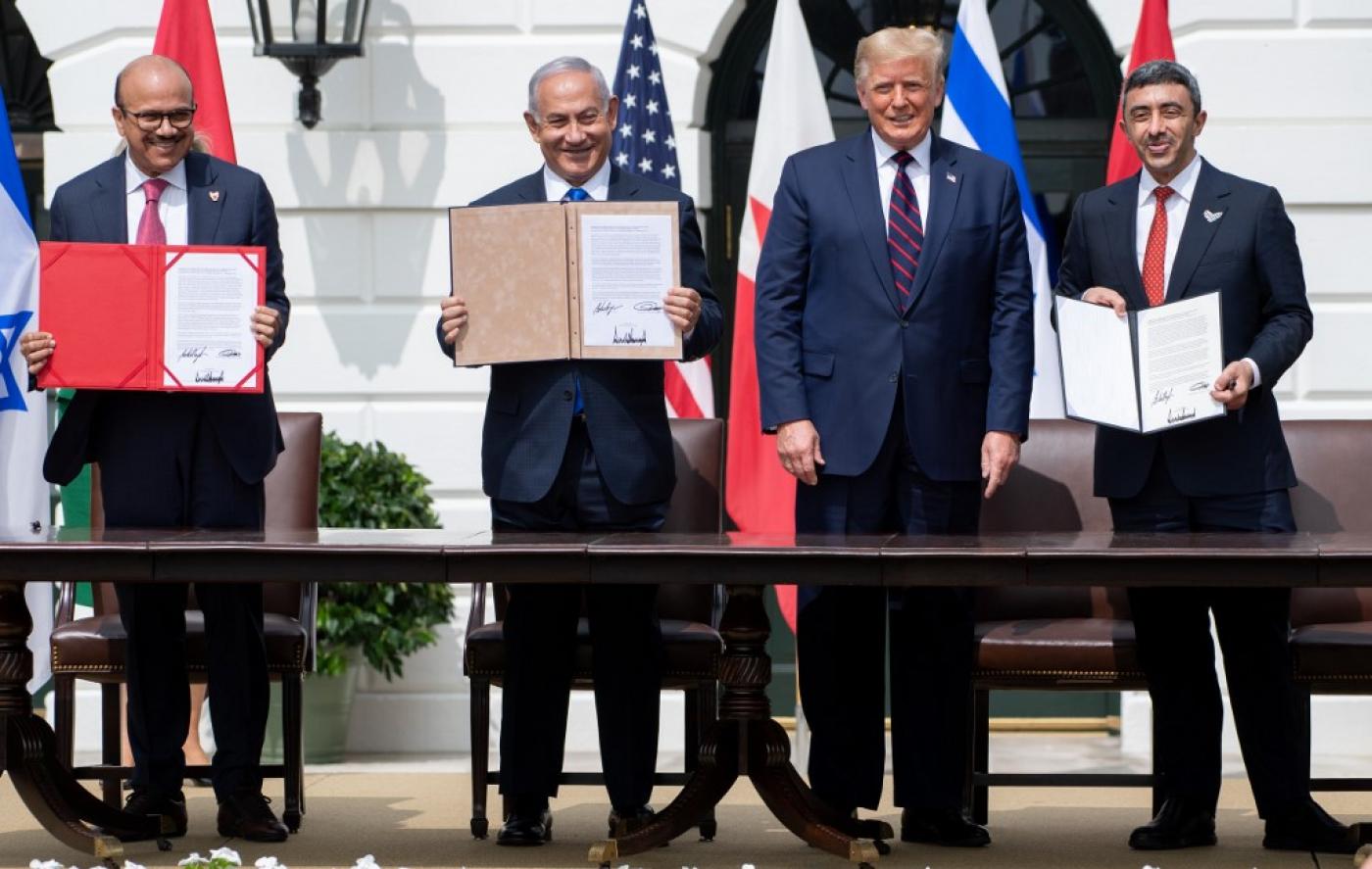 Watching the ceremonial signing of normalisation deals between two dictatorial Arab Gulf regimes and Israel at the White House this month brought back the overwhelming grief and outrage that swept us, as Palestinians and Arabs, when Egypt signed the Camp David Accords with Israel four decades ago.

I remember my father and relatives seething with rage, as if their entire world had crumbled. As a second-year university student, I and many other Palestinian students staged an angry demonstration against then-Egyptian President Anwar Sadat, who we deemed a treasonous surrenderist.

Our big dreams for the liberation of Palestine, the return of refugees, freedom, and a united and developed Arab world had been shattered.

Subservient to the US

Under the leadership of former President Gamal Abdel Nasser, Egypt, the largest Arab country, had become the centre of gravity for militant anti-Zionist and anti-imperialist pan-Arabism. For many years, it constituted the primary source of hope for ending Zionist and western imperialist hegemony over the Arab region, and achieving economic and political independence and development.

This explained the scale and intensity of the Arab rejection of the 1979 Camp David Accords, which stipulated the withdrawal of Israeli forces from Sinai in return for Egypt withdrawing from the united Arab front against Israel.

Egypt’s new orientation, which included opening up to the West and embracing neoliberal fiscal policies, proved disastrous to the Egyptian people. The lifting of subsidies on food and other essentials, recommended by the International Monetary Fund, triggered a popular uprising that was repressed at a high human cost.

Decades since the catastrophic agreement came into effect, Egypt’s economic, social and political crises have intensified. Egypt has become subservient to the US and has stood by as Israel continues to besiege, assault and colonise millions of Palestinians, in addition to its attacks on Lebanon and the Syrian Golan Heights.

Catastrophic consequences also followed the signing of the Oslo Accords and Jordan’s peace deal with Israel in the 1990s. As Egypt, Palestine and Jordan have justified their disastrous agreements with Israel by pointing to the massive costs of war, many are now wondering why Bahrain and the UAE - who were not at war with Israel - are embarking on similar steps, proven a failure in the other countries.

Normalisation between Israel and the two Gulf states was not a sudden development, with steps being taken towards this goal for years. What is shocking is that the two parties to this new unholy alliance - particularly the UAE - have gone beyond normalisation, dangerously embracing the Zionist narrative against Palestinians’ struggle to reclaim their historical homeland.

The eruption in 2011 of the Arab Spring, which toppled a number of despotic regimes and shook the foundations of others, led the UAE and Saudi Arabia to become the leading forces of Arab counter-revolution. They helped topple the first elected government in Egypt, and provided financial and military support to anti-democratic forces in Libya, Tunisia, Syria and Yemen.

Their major enemy is not Israel, but their own citizens, who are treated as subjects who may revolt if their silence cannot be bought. Israel, whose ongoing oppression of Arab peoples has relied on these and other despotic regimes, was terrified from the start of the revolutions, fearing the Arab masses would push for a different position on Israel if offered a free, democratic space.

These despotic regimes have given excuses for their alliance with Israel, including their fear of Iran, claims of spreading peace, and the promise of regional economic development. But their main fear centres on preserving their thrones and the interests of ruling families. They have watched with concern the new waves of protest that have erupted in Sudan, Algeria, Iraq and Lebanon.

Selling out the Palestinian cause

The price extracted from these Arab tyrants by US President Donald Trump and Israeli Prime Minister Benjamin Netanyahu is selling out their “commitment” to Arab peace, and in effect disconnecting themselves from any moral attachment to the Palestinian cause.

The leaders of all four countries are mainly driven by their lust for power. But the conduct of Netanyahu, who is facing serious charges of corruption, is also motivated by ideology - a racist, colonial one that aims to consolidate a Jewish state on the ruins of the Palestinian homeland, and achieve hegemony over the Arab world through deals with puppet leaders.

Israel has tirelessly sought, through various means, to normalise its inhuman and aggressive settler-colonial project in the heart of the Arab world. But as long as Palestinians focus on their legitimate rights, no deals will deter them from continuing their struggle. The only solution is through decolonisation, justice and equality.