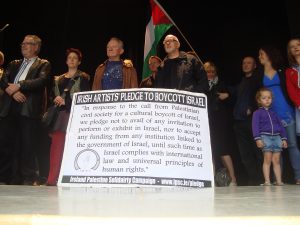 “In response to the call from Palestinian civil society for a cultural boycott of "Israel", we pledge not to avail of any invitation to perform or exhibit in "Israel", nor to accept any funding from any institution linked to the government of "Israel", until such time as "Israel" complies with international law and universal principles of human rights.”  See the full list of signatories below.

In its statement in August 2020, The Palestinian Campaign for the Academic and Cultural Boycott of "Israel" (PACBI) strongly welcomed the Irish artists’ ‘pledge’ to boycott "Israeli" cultural institutions until "Israel" complies with international law.

it added that the pledge not only represents a significant victory for the ethical responsibilities of international cultural figures; a key factor in the cultural boycott of "Israel", but is a ground breaking strategy in supporting Palestinian struggle for freedom and justice.

The artists who have signed are aware of the "Israeli" Foreign Ministry’s statement in 2005 that “We see culture as a propaganda tool of the first rank, and…do not differentiate between propaganda and culture.” These artists refuse to allow their art to be exploited by an apartheid state that disregards international law and universal principles of human rights, but look forward to the day when normal cultural relations can be re-established with an "Israel" that fully complies with such laws and principles.

In 2005, when 170 Palestinian civil society organisations called a campaign of Boycott, Divestment and Sanctions (BDS) against "Israel", they provided a central plank for worldwide activism on behalf of their cause. Culture cannot stand aloof from such activism. Whether or not art is ‘above politics’, its presentation and representation in the real world can all too easily be hijacked by oppressive states. With this pledge, Irish artists have an opportunity to distance themselves from such exploitation, and to take a non-violent stand on behalf of the oppressed Palestinian people.