The First Global Conference on Israeli Apartheid Held in Istanbul 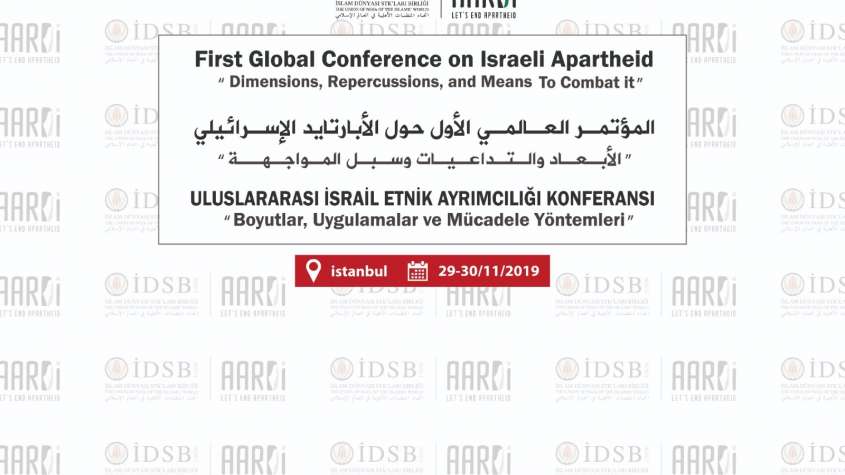 The opening session of the First Conference on Israeli Apartheid, hosted by Istanbul was held on Friday, November 29, 2019.

The opening session included speeches delivered by Rima Khalaf the president of The Global Organization against Racial Discrimination and Segregation and the former Executive Secretary of the United Nations Economic and Social Commission for Western Asia (ESCWA), Ali Kurt Secretary General of The Union of NGOs of the Islamic World (iDSB), Adnan Tanriverdi a chief advisor of the Turkish President Recep Tayyip Erdogan and Attalla Hannah the Archbishop of Sebastia from the Greek Orthodox Patriarchate of Jerusalem.

The conference that is organized by The Global Organization against Racial Discrimination and Segregation jointly with The Union of NGOs of the Islamic World (iDSB), is meant to discuss dimensions and repercussions of Israeli Apartheid and the Means to Combat It.

Expected to last for two days, the 29th and 30th of November 2019, the event includes a wide range of activities such as sessions, workshops, speeches and discussion panels with the participation of Arab and foreign scholars, thinkers, activists and officials.

The organizers aim at maximizing efforts in order to raise awareness on the Israeli apartheid regime; increase knowledge production, build on and expand existing research and documentation efforts; and contribute to the development of legal, grassroots, civil and official initiatives towards ensuring accountability for the crime of apartheid and dismantling the Israeli apartheid regime.

The idea of holding the conference goes back to March 2017 when the United Nations Economic and Social Commission for Western Asia (ESCWA) published a report titled “Israeli Practices towards the Palestinian People and the Question of Apartheid”.

The report, which was authored by two prominent international experts, Professors Virginia Tilley and Richard Falk, concluded that Israel has established an apartheid regime that oppresses the Palestinian people as a whole and seeks to maintain the domination of one ethnic/religious group (Israeli Jews) over all segments of the Palestinian people.

Following the publication of the ESCWA report and the discussion of its contents in various forums, the International Organization against Racial Discrimination and Segregation was established with the aim of combating all forms of racial discrimination, and particularly the discrimination practiced by Israel against the Palestinian people.

One of the main goals of the organization is to create a global coalition that raises awareness in the region and the rest of the world on the nature of the Israeli apartheid regime, and contributes to its dismantlement.