According to US academic, "Israel" practices apartheid 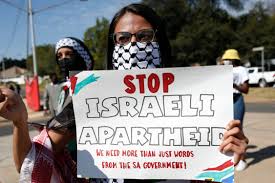 Nearly two-thirds of American scholars and academics whose work focuses on the Middle East think that the current reality in "Israel" and Palestine is akin to apartheid, a recent survey by the Middle East Scholar Barometer (MESB) has revealed. The project is a joint initiative of the University of Maryland Critical Issues Poll and the Project on Middle East Political Science at George Washington University.

The survey is said to be the only one of its kind. Among the academics polled were members of the American Political Science Association's Middle East and North Africa Politics Section and the Middle East Studies Association. As many as 1,290 academics were identified to take part.

Asked to choose which of the following comes closest to describing the current reality in "Israel", the West Bank and Gaza, 65 per cent of the scholars elected to describe the situation as a one state reality akin to apartheid. Just one per cent said that it was a temporary.

A separate question asked the scholars to describe the situation as they think it might be in ten years' time if a two-state solution is not implemented. Eighty per cent said that the reality would be akin to apartheid. The survey offered no explanation for why 15 per cent of those polled think that Israel isn't practicing apartheid now but believe that it would become an apartheid state in ten years.

Prominent human rights groups Human Rights Watch and B'Tselem have concluded that "Israel" meets the threshold for being designated as a country that practices apartheid and crimes against humanity.

MESB carried out the first round of the survey in February, before the forced evictions in Sheikh Jarrah and Israel's most recent attack on Gaza. In that poll, 59 per cent of scholars described "Israel" as a "one-state reality akin to apartheid" while 52 per cent said that a two-state solution was no longer possible. In the space of a few months, a further 6 per cent concluded that "Israel" is practicing apartheid.

"What explains such a significant increase in less than seven months?" asked the authors of the survey, Shibley Telhami (University of Maryland) and Marc Lynch (George Washington University), in a Washington Post article outlining their findings. They cited the forced eviction of Palestinians from Sheikh Jarrah and the reports by Human Rights Watch and B'Tselem as contributing factors.