Jerusalem and the continuing Nakba 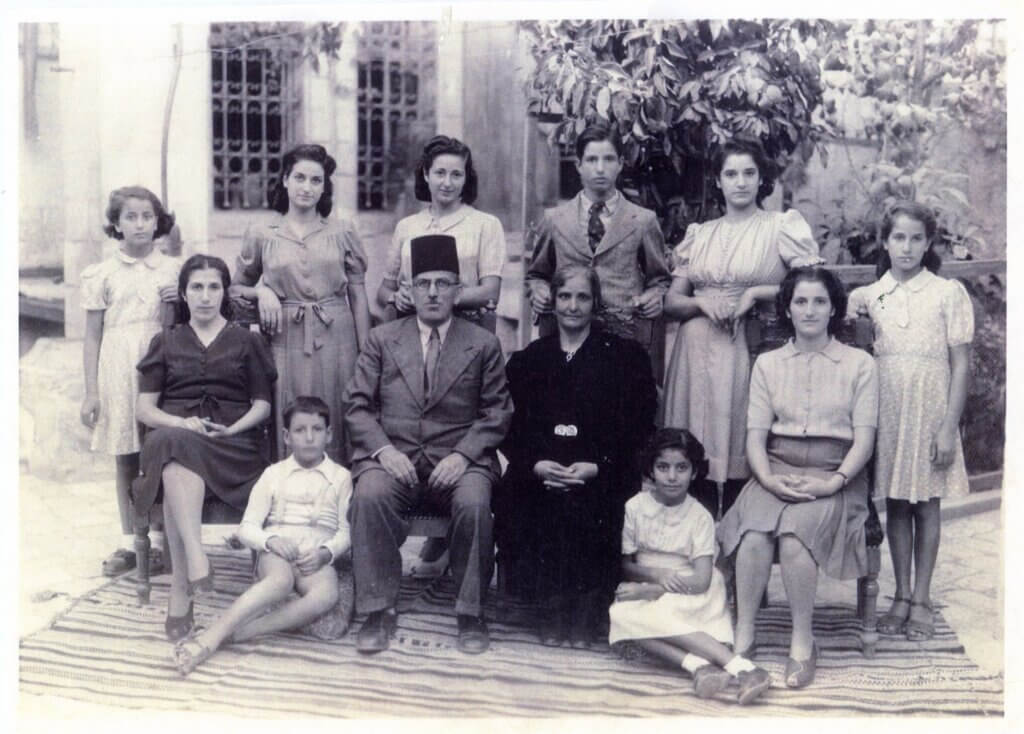 I am a Palestinian American, born in Jerusalem in 1952, four years after the Palestinian Nakba—the Catastrophe of 1948. My family’s story is part of the story of Israel’s ethnic cleansing of my people.

Today, as I see "Israel" proceeding with its settler colonial project in the Jerusalem neighborhoods of Sheikh Jarrah and Silwan, I remember my family’s experience of the continuing Nakba. I have a close personal connection with Silwan and Sheikh Jarrah, neighborhoods in East Jerusalem that are now the focus of Israel’s ethnic cleansing. Following three and a half years of hardship as destitute refugees from the Musrara neighborhood of what became Israeli West Jerusalem, my parents rented a small, two-bedroom apartment in the nearby Sheikh Jarrah neighborhood. In addition to their two children (my younger brother and I hadn’t been born yet,) my father’s mother, aunt, paralyzed older sister, and younger brother crammed into the little apartment with them. Since both my parents had to work to rebuild a shadow of their former life, they employed a teen-age survivor of the Deir Yassin massacre, [1] Rasmieh al-Jundi, to help raise the children. Deir Yassin was a Palestinian village on the western outskirts of Jerusalem where the Zionist forces of Irgun and Lehi massacred between 100 and 110 villagers on 9 April 1948. Menahem Begin boasted that the news of the massacre was crucial in the Palestinian exodus, and allowed the Zionist forces to “advance like a hot knife through butter.” Rasmieh’s family, whose nakba —catastrophe— dwarfed ours, eventually settled in the village of Silwan (biblical Siloam,) right at the southern edge of the walled Old City of Jerusalem. While poverty rates in Silwan were higher than the average rates in East Jerusalem, some of the dwellings there had patios with an expansive view of the southern portion of the Jerusalem Old City Wall. I have fond memories of playing on the patio of the Jundis and eating the delicious food that Rasmieh’s mom always offered, and also of the beautiful embroidered thobes that she wore.

Today, hundreds of families in the neighborhoods of Silwan and Sheikh Jarrah face the prospect of being expelled from their homes to make way for Israeli settlers. Israeli courts put a legal façade on this process, but they are actually facilitating the predation of extremist settler organizations, including Ateret Kohanim, Nahalat Shimon, and Elad, which receive most of their funding in the form of tax-exempt donations from supporters in the U.S. It must be noted that the settlers who have already forcibly replaced some Palestinian families in Sheikh Jarrah, and who are scheming to forcibly displace many other Palestinian families, belong to ultra-religious Jewish sects whose socio-economic status is among the lowest in Israeli society.

Like 85 percent of the Palestinians who lived in what became the Jewish State, my parents were forced to leave behind their home and all that they owned. While the United Nations was complicit in the founding of "Israel" on the ruins of the Palestinian people, a majority of its member states passed resolution 194, calling on "Israel" to allow Palestinians to return to their homes in towns and villages in what became the Jewish State. But "Israel" blocked the return of the refugees, and the western powers looked the other way; Israeli soldiers shot at any Palestinians attempting to infiltrate across the new borders and many were killed. Hundreds of ethnically cleansed Palestinian villages were destroyed, and "Israel" settled tens of thousands of Jewish immigrants in the homes of Palestinians who had been driven out of their towns. And the dispossession has not stopped; many of the inhabitants of Sheikh Jarrah today, as well as some residents of Silwan, are victims of the ethnic cleansing of 1948. Now they are facing forced expulsion from their homes for the second time.

Sheikh Jarrah is within a few minutes’ walk from Musrara, the neighborhood where my mother, Mary Qamar, grew up. Until 1948, my mother lived in a beautiful stone house in the predominantly Palestinian Jerusalem neighborhood. The fighting in 1948 drove them, like nearly all the Palestinians of West Jerusalem, away from their homes, never to return. My mother is now 101 years old; she sometimes has trouble remembering my children’s names, but she vividly recalls the details of her Musrara home, its garden, and even the colors and placement of its furniture. Hundreds of Jewish immigrants took over the homes of the Palestinians driven out of Musrara, including my Mom’s home. Most of the new settlers were North-Africans who spoke Arabic, ate Arabic foods, and celebrated their life events with Arabic music; essentially they were as Arab as my Arab, Christian family.

Musrara later became the birthplace of ha-Panterim Shahorim, the Israeli Black Panthers, who fought against the discrimination they, and other non-European Jews were facing in the new Israeli state. In 1976, I was arrested by the Israeli police, and spent 2 month in incarceration, under “administrative detention,” the infamous practice that "Israel" inherited from the former British colonial power. [2] The first month of my incarceration was at the Maskobiyeh (Russian Compound), bordering my mom’s neighborhood of Musrara. There, I developed a friendship with one of the founding members of the Black Panthers, Reuven Abergel, who grew up in Musrara, a block away from where my mother’s home stood. He and his brother, Eliezer, were jailed on some minor drug charges. Over forty years later, I met Reuven in Jerusalem, when he was leading a tour of Musrara for a human rights delegation. From him, I learned what happened to the Musrara neighborhood after 1948 when my mom’s family was forced to leave. He said the North African immigrants were settled in Musrara as the European Jews found it undesirable due to its proximity to Jordanian army posts right across the border. At the time, it also lacked electric and water utilities because those used to be supplied from what became Jordanian-controlled East Jerusalem. Spacious homes that had been occupied by single families had been partitioned to house several Jewish families, often one family per room. There was rampant unemployment, and eventually, crime.

Seventy years on, Reuven told me, Musrara is experiencing gentrification. Because it is close to the center of Jerusalem, it has become a very desirable location. Poor Moroccan Jewish families are priced out to make way for affluent Israelis and some of the formerly beautiful but run-down stone houses are being renovated and restored to single family homes to be sold at very high prices.

The results of this history, the history of my family and that of Palestine, has been on display over the last few weeks. As protests against the ethnic cleansing of Palestinians from Jerusalem neighborhoods intensified, ultra-religious Jewish extremists provoked Palestinians further with racist rallies claiming Jerusalem for Jews only. Israeli police attacked Palestinian worshippers inside al-Aqsa Mosque Compound, desecrating the third holiest place for Muslims in the middle of the holy month of Ramadan. In response Hamas issued warnings to Israeli authorities to stop the attacks on Palestinians in Jerusalem and the desecration of al-Aqsa, and, predictably, fired its crude missiles into "Israel", and "Israel" launched yet another savage attack on Gaza with hundreds of civilian casualties, including scores of children.

The story of the ethnic cleansing and settler colonialism Silwan, Sheikh Jarrah, Musrara, and Deir Yassin and Israel’s wanton killing of Palestinians, especially in Gaza, are emblematic of the story of Palestine/"Israel" in the past hundred years or so. It is a story of injustice, violence, and rampant inequality. It is a story of European settlers displacing an indigenous people who become the most persecuted segment of society in their homeland. But it is also the story of inequality among Israelis, where non-European Jews are suffering from gentrification, and where poorer ultra-Orthodox Jews are used as a vanguard in belligerent ethnic cleansing of Palestinians, in the name of religion. It is also the story of one of the most militarized societies in modern times.

Violent repression of Palestinian protesters, and savage attacks by Israel’s military against the defenseless inhabitants of Gaza are an essential element in what some consider a brilliantly successful economy. This violence is a foremost marketing tool for Israel’s selling its military and surveillance hardware and various mercenary and training services to repressive regimes around the world. "Israel" can boast that its policing techniques and lethal weapons are continuously field-tested.

Israel’s continued predation on Palestinians necessarily means that it has a severe internal “security problem,” and its perpetual state of conflict keeps its deep internal divisions on a backburner. The most effective Israeli political figures are the ones who can convince their Jewish constituents– no matter where they fall in the hierarchy of Israeli society– that they are the toughest in “maintaining security” against the Palestinian, Arab, or Muslim threat.

How long can "Israel" sustain the mythology that underlies its settler-colonialism and militarism? As it moves further and further to an unabashedly supremacist ideology and unrestrained violence against Palestinians, will it be more difficult for the western powers to maintain their material and moral support? The international solidarity movement with the Palestinians has, in fact, gained significant support in recent years, notably in tandem with the growth of anti-racist groups like Black Lives Matter and Jewish Voice for Peace. The stronger such movements grow, the higher the chances that forces of peace and justice will prevail in Palestine/"Israel".