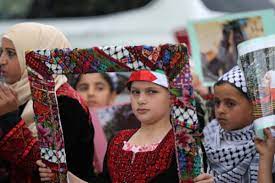 On the seventh of October of each year, Palestinian people celebrate the Palestinian Heritage Day, an annual occasion during which events are organized to revive the Palestinian heritage with the aim of preserving it from oblivion and theft.

The origin of the story of the Palestinian Heritage Day is attributed to the historian Nimr Sarhan (author of the Encyclopedia of Palestinian Folklore), who thought in the summer of 1966 to prepare for the Voice of Palestine Radio from Jerusalem a program on the Palestinian village entitled “My Village Is There”, in which he talks about popular songs and music in Palestinian villages. Although the program was not broadcast, due to political circumstances, it began its journey in research, study, and collection of Palestinian folklore from popular songs, chants, chants, customs and traditions, games, and popular foods, in an academic way.

The historian Sarhan began publishing the Encyclopedia of Palestinian Folklore in 1977. With the publication of the fifth part on July 1, 1981, with the participation of the encyclopedia preparation committee; With the support of the "General Union of Palestinian Writers and Journalists" - it was decided to adopt this day every year as a day to celebrate the Palestinian Heritage Day; With the aim of preserving the cultural heritage of Judaization and theft carried out by the "Israeli" authorities.

Later, on the recommendation of the Palestinian Ministry of Culture, the Council of Ministers decided on May 14, 1999 that the 7th of October of each year would be the “Palestinian Heritage Day,” instead of the 1st of July; Because the students have been organized in their schools, it is easier to commemorate this day more effectively; In addition, the month of October is the olive harvest season. The olive tree is a clear symbol of giving, steadfastness, clinging to the earth and rooting in it.

The Palestinian heritage is one of the basic pillars of the Palestinian identity, as it manifests in most of its components our privacy as an ancient people in our tangible and intangible heritage, rooted deep in history, since our Canaanite ancestors.

The Palestinian folklore represents a huge wealth of literature, values, customs, traditions, folk and cultural knowledge, plastic arts, religious rituals, tales, proverbs, riddles and riddles, popular games, food, clothing, dabke, songs and folk music. In addition to Palestinian architecture; Therefore, we must make great efforts to preserve the heritage from loss by protecting it at the national and global levels.

Here, it must be noted that the United Nations Educational, Scientific and Cultural Organization “UNESCO” adopted on October 18, 2016, during a meeting in the French capital, Paris - a resolution denying the existence of a religious connection for the Jews to Al-Aqsa Mosque and Al-Buraq Wall, and considers them to be a pure Islamic heritage and rejects unilateral "Israeli" measures.

It should also be noted that on March 12, 2018, the League of Arab States announced the adoption of Jerusalem as the "permanent capital of Arab heritage." It also set the Arab Heritage Day in the year 2019 to be a day for the Jerusalem heritage.

Preserving the Palestinian heritage in the face of all hostile "Israeli" attempts to obliterate and steal it means ensuring the preservation of our existence, our continuity, and the secret of our survival on this land.