A new crime of "Israel": the demolition of the Yusufiya cemetery in Jerusalem 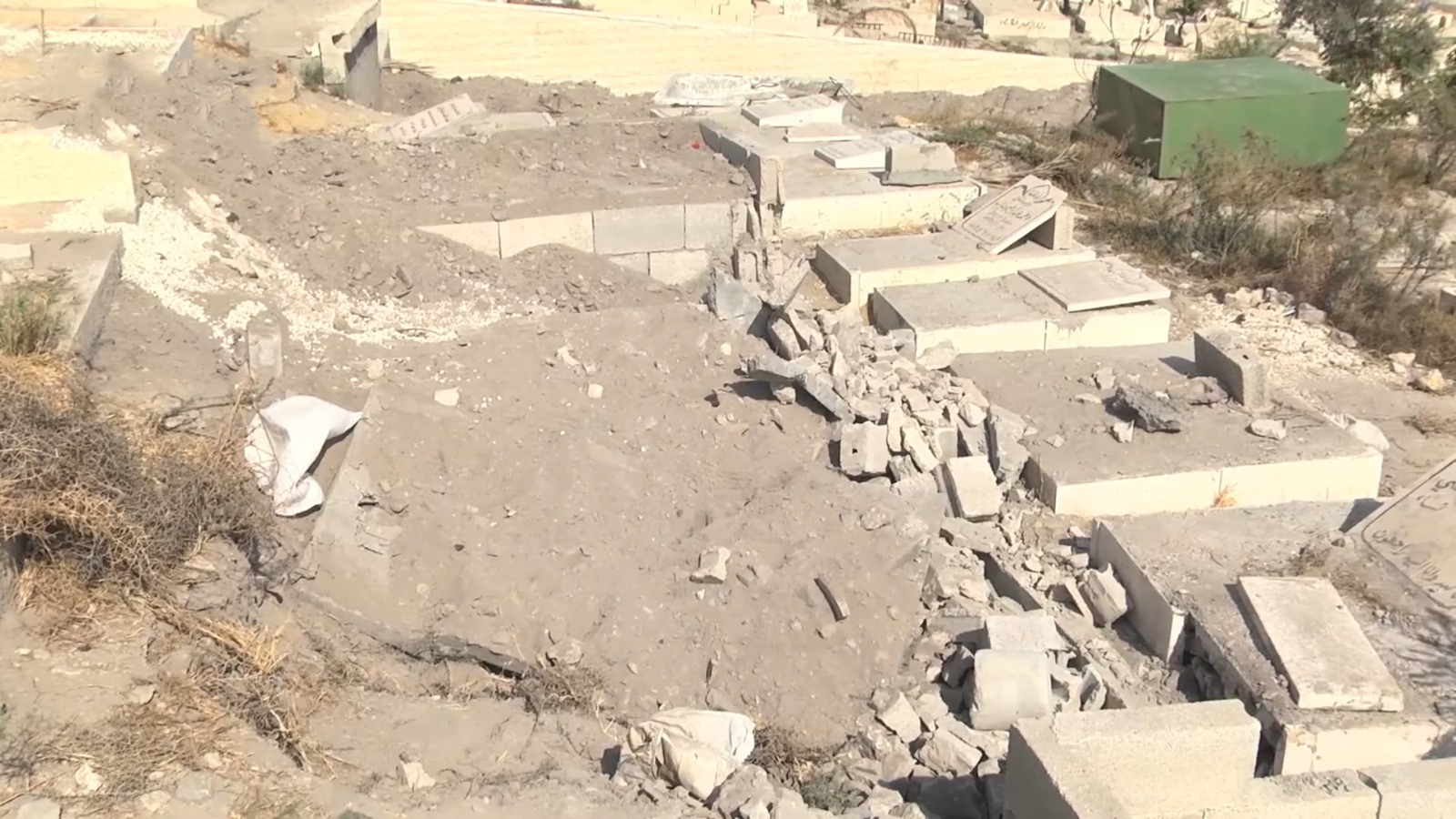 On Sunday 10/10/2021, "Israeli" vehicles razed parts of the Yusufiya cemetery adjacent to the blessed Al-Aqsa Mosque from the eastern side.

After razing one of the graves from the cemetery of the martyrs of the Yusufiya cemetery and the appearance of the bones of one of the dead, the Jerusalemites confronted "Israel" and forced its bulldozer to leave the place and renovated the tomb.

The bulldozing operations came after the "Israeli" courts responded to the request of "Israeli" municipality in Jerusalem and what is known as the “Nature Authority” to resume bulldozing work in the cemetery. The decision also includes allowing the conversion of a plot of land into a public park in order to ensure that Muslims are prevented from creating new graves in them, as part of efforts to Judaize Jerusalem and change its history and geography.

The head of the cemetery committee in Jerusalem, Mustafa Abu Zahra, said, "We informed the "Israeli" court that this cemetery contains 40 martyrs and a group of graves, and we documented that in court."

He described the operations of bulldozing the graves as a shameful act, stressing their condemnation of what happened in the Yusufiya cemetery.

Abu Zahra also called on the people of Jerusalem to go to the cemetery and protect their families' graves from exhumation and desecration.

The "Israeli" forces had demolished the cemetery’s wall and the stairs at the entrance leading to it in early December 2020, and then continued excavation and bulldozing work in the Martyrs’ Cemetery, which includes the remains of martyrs from the Iraqi and Jordanian armies, in favor of the “Biblical Garden Path.”

Al-Yusufiyah cemetery is located north of Bab al-Rahma cemetery and adjacent to the eastern wall of Jerusalem. It has been under attack for years by the "Israeli" authorities and excavations, which reached archaeological foundations close to the doorstep of the "Al Asbat Gate".

In this context, the "Israeli" forces demolished the wall of the cemetery adjacent to the "Al Asbat Gate" and also removed its archaeological staircase, in addition to the staircase leading to its extension from the cemetery of the martyrs, in implementation of a set of plans of "Israel" that had been prepared for a long time.

In 2014, "Israel" prevented burial in its northern part and removed twenty graves belonging to Jordanian soldiers who were martyred in 1967 in what is known as the Martyrs' Cemetery and the monument to the Unknown Soldier.

The cemetery is considered one of the most important and prominent Islamic cemeteries in the city of Jerusalem, and is filled with the remains of all the people of the holy city, senior scholars and mujahideen, as well as hundreds of martyrs.

The "Israeli" municipality has been working for a long time to besiege the cemetery and surround it with Judaizing projects, paths and Talmudic gardens along the eastern wall of the city of Jerusalem and adjacent to the cemetery, with the aim of concealing the features of the corridors and the authentic historical sites surrounding the cemetery.